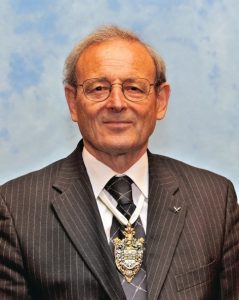 Nick was born and raised in Sheffield, a proud Yorkshireman.  He was educated at Elizabeth College in Guernsey, Channel Islands and Sheffield Polytechnic (Diploma of Management Studies).

Starting his working life with GKN Ltd in Birmingham and Cardiff, he then joined his family engineering business in Sheffield on the shop floor and worked his way up to Works Director, with works in Walsall and Sheffield.

A family fall out in 1993 saw him move to GT Tubes Ltd, a manufacturer of steel structural hollow section, as General Manager.  He became Managing Director on their acquisition by Australian National Industries Pty (ANI) which had sister plants in Brisbane and Chicago and head quartered in Sydney.

In 1998, international company politics, excessive travel and the likelihood and subsequent acquisition by Smorgon Steel, saw him leave to acquire his own engineering business and to form the SMP Group of Companies – a diverse group of small metal finishing and manufacturing companies in Sheffield.

Now semi-retired, he still maintains his interest in steel and manufacturing as a “Little Mester”, manufacturing a select few products, including the ubiquitous stainless steel “Presto Egg Opener” (The only way to cut the top off a raw or boiled egg), first produced by John Watts Ltd, a Sheffield company going back to 1765.

He spent many years in the Territorial Army, commanding 75 Engineer Regiment between 1992/5 and completing his TA career as Deputy Commander 42 (North West) Brigade in the rank of Colonel.

Currently maintaining his links with the Reserve Forces as Chairman of the North West of England and Isle of Man Reserve Forces and Cadet Association.  He is also National President of St John Ambulance

He lives in the Peak District of Derbyshire and is married to Susie, with three grown up children.  His interests are split between the summer when he can be found or rather heard as a commentator at Horse Trials throughout England and winter when, having given up active refereeing, he is a Rugby Union referee advisor and assessor.  He is also a keen supporter of all country sports.

*As a consequence of the current Covid-19 crisis, the Cutlers’ Company has decided the re-elect the 2019-2020 Company for a further year.  This is not the first time such a re-election has happened.  It also happened during the two World Wars.

The Company in difficult times 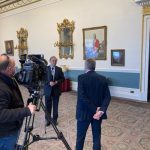 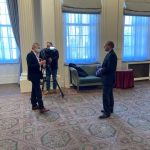 on to his year in office, the present Master is serving a second year and he is attending more meetings – both virtual and in the Hall.  The Company was saddened by the death of HRH The Duke of Edinburgh, who was an honorary Member of the Company.  He had made several visits to the Hall, the first being in 1954, with her Majesty the Queen.  The Master was interviewed on ITV Calendar to comment on the Duke’s involvement with the Company.  The Master stands in front of  an unfinished portrait of Prince Philip.   The national situation is improving and the Company’s work will begin to return to normal.  During the 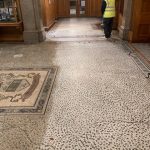 shut- down of the Hall, the Company took the opportunity 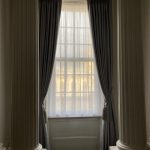 to undertake major redecorations.  The Entrance mosaic  floor shows one half after cleaning.  The Drawing Room and Reception Room have both had new window dressings.