The Halls of the Cutlers' Company

The first Cutlers’ Hall was built in 1638, and the two later Halls were built on the same site. The accounts show that the Company bought the land for £69.12s. Unfortunately, there are no contemporary pictures of this Hall.

This first Hall was demolished in May 1725 and the site cleared for the building of the second Hall.  In the 1720s, the Company considered looking for a better piece of land on which to build a new Cutlers’ Hall.  Negotiations were undertaken with the Duke of Norfolk’s agent, Mr Henry Howard, who offered the Company a large parcel of land close to where the present Town Hall now stands. But the ground rent was set at £22, and the Company would only agree to £21.13s.3d.  So, for the sake of 6s.9d, the scheme foundered and the Cutlers’ Hall remained on its present site.

However, by 1827, the state of this second Hall was causing a great deal of public concern.  A letter appeared in the Sheffield Independent saying:“Its exterior appearance is unworthy of the Company to whom it belongs”.  In 1832, following the demolition of the second Hall, the present Cutlers’ Hall, the third on this site, was built . It was designed by two architects, Samuel Worth and Benjamin Broomhead Taylor, who had both submitted plans, but when the Company was unable to choose between these plans, the two architects agreed to work together.  The building cost the Company £8,846.12s.1d, with a further £1,092.3s.2d spent on furnishings.

In 1867, the Hall was extended to the rear, with the addition of the Main Banqueting Hall on the first floor with the Hadfield Hall beneath and in 1888, the frontage was extended westward.

It is a Grade 2* Listed building, privately owned by the Cutlers’ Company, and is considered to be one of the finest Livery halls in the country.

Since the third Hall was built it has provided a venue for a variety of events – for concerts, lectures, meetings, dances, etc.  It continues to be a splendid place for private and public events.  For more information

go to  Tours, Visits and Hospitality 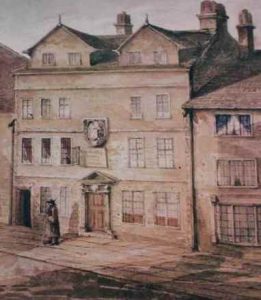 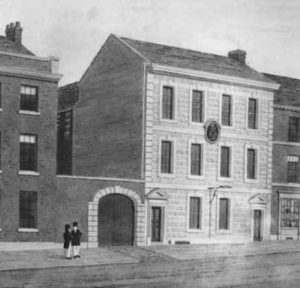 The second Cutlers’ Hall, built in 1723.
Drawn just before it was demolished to
make way for the third Hall (1832) 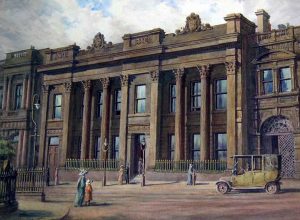