Until the middle of the 19th century, the Cutlers’ Company  had only a small collection of silver, most of which had been received as gifts.  For its annual Feasts, silver items were hired from local manufacturers and shops.  However, in the 1940s, a large private collection of Sheffield hallmarked silver was auctioned and Stuart Goodwin, a Company Member, purchased it and gave it to the Company.  The collection had been assembled by Thomas Bradbury, whose firm was in voluntary liquidation in 1944, and he was concerned for the future of some 500 pieces, dating from 1773 to 1840.  1773 was the year the Assay Office in Sheffield was founded.

Discussions were held in the Company about how to bring the collection up to date in 1945, by seeking out hallmarked pieces for 1840 to the 1940s.  Stuart Goodwin again gave financial support but it wasn’t until 1999 that the run of silver, 1840-1944 was finally completed.  The next question, however, was how to acquire new pieces of silver for each year in the future.  Once again Stuart Goodwin generously sponsored a design competition for Sheffield silversmiths and students.  The Company would set the design brief and choose the winning entry.  Stuart Goodwin (later Sir Stuart) funded the competition and gave monetary prizes. 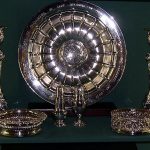 Left is a rosewater dish designed by Wallace Smythe, of Mappin and Webb, for the 1956 competition and was given to the Company by Lady Goodwin.  In 1964, the prize winner was Barry Lee of British Silverware Ltd. with a design of a tazza (below).    The annual design competition ended some years later, after Sir Stuart died in 1969. Further gifts have been received and the concept of having a ‘Year Piece’ was taken up by retiring Masters Cutler – presenting a piece at the end of their year in office.  The Cutlers’ Company now has at least one piece  of Sheffield hallmarked silver for every year since 1773.  The majority of the pieces are on display in the Cutlers’ Hall.

From the Company's Silver A goblet hallmarked in 1773 in Sheffield.  Made by Hancock and Rowbotham, with the date letter ‘E’ for the Earl of Effingham who was Chairman of the Committee of the Guardians of Assay.  Joseph Rowbotham was Master Cutler in 1780, and died in his year of office.  The goblet also has a Britannia mark – indicating it is almost pure silver. 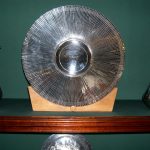 The gift from the Sheffield Assay Office of a dish by David Mellor, to celebrate their Bicentenary in 1973. 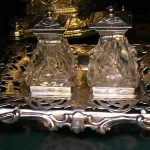 Inkstand by Henry Wilkinson, 1847, presented to the Company by the Lord Mayor of London, 1999.