The Cutlers' Company in the Sheffield Region

In 1624, the cutlers of Sheffield lobbied Parliament for an act to give themselves control over the organisation of the cutlery industry in Sheffield.  The Company controlled an area centred on the ancient Manor of Hallam and the surrounding villages.

It operated in much the same way as a medieval craft guild – indenting apprentices, registering Freemen and controlling the quality of manufactured goods. The Company had the right to enforce its bye-laws and charge fines. But it is not a Livery Company like the Worshipful Company of Cutlers in London. Livery Companies are established by Royal Charter.

all persons using to make Knives, Blades, Scissers, Sheeres, Sickles, Cutlery wares
and all other wares and manufacture made or wrought of yron and steele,
dwelling or inhabiting within the said Lordship and Liberty of Hallamshire,
or within six miles compasse of the same…

The annually elected Company of Cutlers consists of thirty-three people – a Master Cutler, two Wardens, six Searchers and twenty-four Assistants.  To maintain continuity, Freemen generally entered the Company as Assistants acquiring knowledge of Company affairs, gradually moving to become a Searcher, then Junior Warden, Senior Warden and finally Master.  At the end of their term of office, a Master may continue on the Company as an Assistant.  The unusual title ‘Searcher’ was of vital importance.  The Searchers were responsible for checking that the registered marks of new Freemen did not look too similar to existing ones.  They also had the right to enter any workshop to ensure no fraudulent marks were being used and that blades were being made with an ‘edge of steel’.  The Company had the power to issue fines and destroy ‘deceitful wares’.

A Clerk and a Beadle are employed for administration and to perform ceremonial duties.

Directors involved in manufacturing in the Sheffield area can apply to become Freemen and there are currently about 350 Freemen. 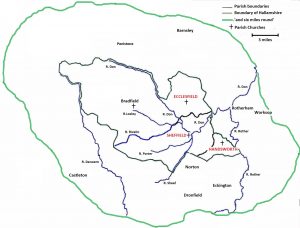 Map of Hallamshire  (click on map to enlarge it)

Hallamshire, in 1624, consisted of three parishes – Sheffield, Ecclesfield and Handsworth.  The town of Sheffield was surrounded by a number of small villages and hamlets, on the flat land in the east and the high moorland in the west.  The map shows the extent of the Company’s influence and the number of rivers flowing down from the upland in the west to the river Don valley in the east.  These rivers were vital to Sheffield’s industrial development in that they provided water power for forges, grinding wheels, etc.