The Cutlery
and Paintings

The Company's Collection of Cutlery and Paintings

Cutlery, in Sheffield manufacturing terms, means ‘things that cut’.  This includes, knives, scissors, shears, edge tools, etc. and the Company has a varied collection of knives, scissors and razors.  Many of the knives have been given to the Company and survive from the 19th century, mainly because they are impressive with large blades and decorative handles. Typical of these are the ‘Bowie knives’.

Around 1914, Harry Brearley was a Sheffield metallurgist, endeavouring to produce a usable stainless steel for table knife blades. A framed group of knives, which shows his early experimental blades, was presented to the Company in 1936 by Harry Brearley.

In the 1990s, the Company received a collection of over 1,400 open razors, commonly called ‘cut-throat’ razors.  These show a wide range of styles and materials, from the everyday razors to highly decorative items, which might have gilded blades and carved ivory handles. 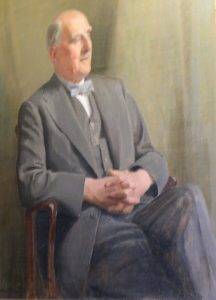 The Company’s collection of paintings are mainly portraits of Masters Cutler and of men associated with Sheffield’s history.  This is a portrait of Sir William Wood, by Dennis Fildes.

William was born in 1878, his mother came from the Bassett family (of Liquorice Allsorts fame).  He  began his career in a Sunderland marine engineering works.  He was Master Cutler in 1924 and, at the outbreak of the Second World War, he was elected to serve again, from 1940-45.

His grandfather founded the Wardsend Steel Company in 1860 and William held a controlling interest, going on to become a director of Darwin’s Steel and Andrews Toledo Ltd.  He was knighted in 1959 and died in 1963. 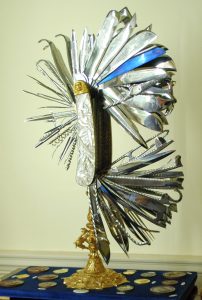 The Norfolk Knife made by Joseph Rodgers for the Great Exhibition, London, 1851.

The Norfolk Knife, which is named for the Duke of Norfolk, has 74 different blades and implements.   One man, William Bamforth, made most of the blades, while Charles Levesley carved the mother-of-pearl scales, depicting a deer hunt on side and a boar hunt on the other.

Acid-etched images on the blades include the Capitol, Washington; Arundel Castle; Chatsworth House and Windsor Castle.  There are also a number of heads – including Queen Victoria, Prince Albert, the Duke of Wellington and Shakespeare.