The Company’s archives are stored in the Cutlers’ Hall and record the internal administration of the Company. But as the Company was so closely linked to the development of Sheffield and its core industries, its archives can shed light on both local and family histories.

The archives are grouped according to subject and cover such topics as administration relating to apprentices, Freemen, marks and trademarks; committee minutes relating to the preservation of the Halls and collections; and accounts of economic enterprises and minutes of the Company meetings.  There are also photographs of Company events, mainly from the late 20th century.

As well as the Company’s administrative documents, items from outside are added to the collections, as gifts to the Company  from time to time, .  An example is a large deposit of the personal documents of Charles Belk, relating to his year of office as Master Cutler in 1885-1886.  Interestingly, papers of his descendent,  Tim Reed, who was Master Cutler in 2005-2006, have also been deposited. 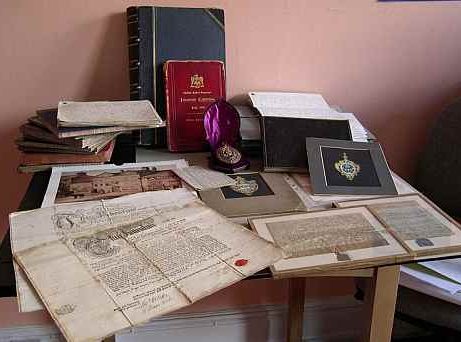 The Belk collection – notebooks, documents, drawings, letters and the Past Master’s badge. 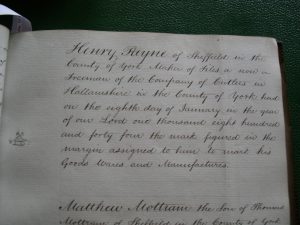 People are welcome to consult the archives and should contact the Cutlers’ Hall to make an appointment.  The most commonly requested archives are those relating to family history and to dating cutlery, etc.

It should be noted, however,  that the biographical details of apprentices and Freemen only cover the period 1624-1814.

The Company has trademark records to 1995, but has no information about individual manufacturers or manufactured goods.

Please note that during the Covid-19 crisis, it will not be possible to visit the Hall to consult the archives.  However, the Archivist is willing to answer queries and follow up straightforward requests for information.